Writer: C. Neil Davenport presents a full length original drama about two estranged brothers who must face their fears of the unknown as they embark on a perilous open water journey, sailing through their forgotten and sometimes terrifying past on a quest to claim their inheritance. 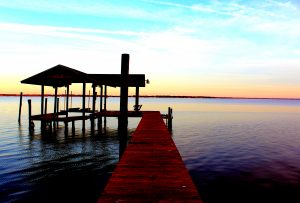 We hear the tide wash up against a dock, birds chirp in the wind and a storm picks up in the distance.

(Simultaneously) Text appears: “You cannot swim for new horizons until you have courage to lose sight of the shore.” – William Faulkner

The entire quote fades out except for the word, “shore” an additional word fades in beside it. “line” creating the title: “SHORELINE”

Opening Credits fade in and out with old creased photos of the Masterson family in a worn photo album: A photo of the Nautilus sailboat in it’s prime: written in simple cursive below the photo reads the production company. A photo of Julia cooking Christmas dinner: Director. A photo of Albert playfully burying Jared in the sand at the beach: Actor’s names and so forth with each above the line credit.

EXT. UNDERWATER / ABOVE SURFACE – SUNSET
We follow a sailboat’s hull as it lifts out of the water. A crane from a distance moves it closer to the shoreline. The sound of a needle touching a record is heard. The song, ‘Beyond the Sea,’ by Bobby Darin plays.

From out side the cabin, the CRANE OPERATOR, (40s), pushes the in the clutch.

NICK, (20s), an employee of the marina holds a rope tied to the sailboat keeping it steady.

The wind blows Nick’s hair back. The crane moves the sailboat towards the marina. The sailboat shifts in the wind.

NICK (YELLING AT CRANE OPERATOR): What do you think I’m doing?!

EXT. SOMEWHERE IN THE MARIA CLOSE TO RAMP- CONTINUOUS

A stabilized older sailboat sits on the end of a row of other stabilized boats. The music is coming from this one.

A record player spins a vinyl overlooking a vast number of stabilized boats in the distance. A bird lands on the top of the boom, the stern’s American flag flutters and the old boat baths in the sun. The cabin door opens. JULIA MASTERSON, an astute 70 year old woman walks on the upper deck. She looks to have just came from a funeral. A sudden rush of wind hits her, she catches herself while holding on to her veiled sun hat. The veil lifts and shows her red eyes and matching lipstick. Julia yanks on the mainline and hoists the mainsail. She runs her hand across the bottom of the sheet and finds a number of small holes from it’s aged quality.

The crane is heard as it nears closer. Julia watches the carried sailboat being driven in.

Julia climbs down the ladder propped against the sailboat’s railing. The wind rushes.

On the ground is an urn sitting on top of a folded cloth. Julia picks up the urn, grabs the cloth and climbs back up. Halfway, the wind picks up, the mainsail fills up, shifts the boat and Julia’s hat flies off. She reaches for it, misses and drops the urn. It hits the ground, the lid pops off and ash flies escapes with the wind.

Julia climbs down, misses a rung and falls off the ladder. She holds in the pain, grabs the urn and covers it. She sees Nick’s boots under the hull of her sailboat. The crane gets louder as it pulls up.

The crane overcomes her voice. Julia tries to get up, but can’t.

The crane’s engine shifts gears, the sailboat lowers, the wind rushes and the sound of twisting metal is heard.

The lifted sailboat slams into the side of Julia’s. The record player’s needle scratches over the vinyl. Julia’s sailboat tilts and the full mast casts a shadow. Julia cannot move her legs.

Nothing. Julia scoops out the remaining ash, throws it in the air and gestures a goodbye to her husband. Her sailboat leans over more. The shadow gets darker.

A COLLECTION OF MEN’S VOICES (O.S.): Throw the mainline! Hook her down! Get out of the way!

Her sailboat stops. Then beneath the hull, Julia sees a collection of men scrambling around.

Julia spots the lid under the keel, looks at the urn then rubs her hand feeling the leftover ash. An idea hits her. Julia gets on her belly and reaches for the lid. Nick runs around with a bundled rope and sees Julia.

She looks at him and continues to reach. Her sailboat creeks as it tries to continue leaning. Nick drops the rope, rolls Julia over, picks her up and carries her away towards the ramp.

JULIA: NO! Take me Back! Stop!

Nick sets her down.

NICK: Is he in the boat Mrs. Masterson?

Julia smiles and shows him the an empty urn. Nick understands and sinks to her level.

Julia points at her leaning sailboat.

NICK: To do what?

JULIA: To fix it, darling. It’s my last change to make things right. Wouldn’t you do anything if it meant fixing your family?

Nick combs his hair back, turns and watches the crew of men try and keep her sailboat from toppling over. Nick runs towards her sailboat.

The last bit of sunlight makes the painted letters on the boat’s stern glistens. It reads, “The Nautilus.” This scene fades to look like a photograph.

A framed photo of THEODORE MASTERSON, (60s) sits on a tool box. He looks old, but strong as he stands on a ladder facing the stern of the Nautilus with a big smile as he paints the letters “N A U T”. Next to the photograph is a ratchet, some workers string and motorcycle key with a capital ‘M’ key-chain. ALBERT MASTERSON’s, (30s), hand enters the frame wearing a wedding ring with a unlit cigarette in-between his fingers as he picks up the key.