Story Developer & Writer: C. Neil Davenport presents a short script art house adaptation of ‘Compromises,’ an excerpt of House of Bones by poet, Ian C. Williams about a misdirected man who literally buries his past regrets in the middle of a wheat field. 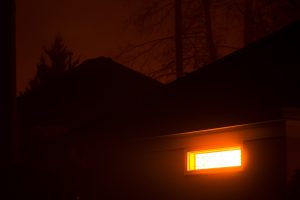 We hear the shoveling of dirt.

EXT. FIELD – NIGHT
The fog rolls over the naked tree branches. We catch a young man in the middle of a moment as he digs a hole with a shovel. He wears a hoodie. Encased in a red light from the taillights of a car.

NARRATOR (O.S.): I parked my car in an empty field to bury my body double, to drop his mirrored limbs in the cistern I hewed night after night.

The sound of his shovel cutting through the dirt grows louder along side his breathing.

NARRATOR (CONT’D): He kicks against the cords around his ankles.

The man stops shoveling for a moment.

NARRATOR (CONT’D): Hair over his eye, he’s singing songs I left buried in holes where the grass has already grown over.

He stabs the shovel into the ground. He walks to the car’s trunk.

NARRATOR (CONT’D): He wrestles his sleeve, his hoodie strings long like fractured concrete –

The man fumbles with his ring of keys, opens the trunk and pulls out a body length mirror. Looks at himself. Pulls back his hood. His eyes look back at him.

NARRATOR (CONT’D): He wandered in the glow of cold afternoons when wet palms clenched the fog in front of trembling lips, anxious arms pressing down old bones beneath the clay of his chest.

He wipes his hand across his reflection. Blood and dirt smear the glass. He drags the mirror, lays it in the hole and shovels dirt on top of it.

NARRATOR (CONT’D): We are the grave diggers, our outlines syncing up to the backbreaking work of erasure.

(From the mirror’s point of view) Dirt slowly rains, covering the screen until we only see black.

NARRATOR (CONT’D): I grip the splintering handle before shoveling in the dirt. As it falls, he wrestles harder.